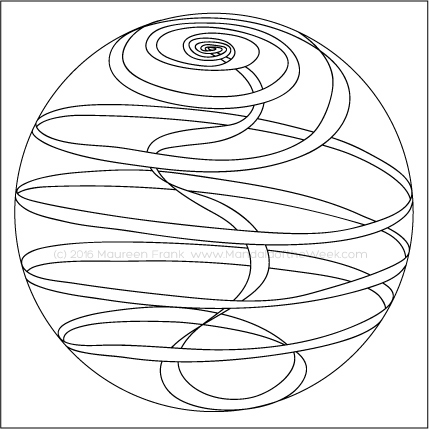 I have to admit…I REALLY like this mandala design. When it “popped” into my head, I immediately embraced it as a very cool idea. I love the three dimensionality of it, the swirls, curves and spirals of it. I love how it’s an infinite loop. It’s like a multi-dimensional, stretched-out version of the infinity symbol.

To me, it beautifully represents our Divine experience here in the three-dimensional earth realm. We go inward to dip into the infinite Well of Divine Potentialities (Well). From that Well, we attached to an idea that makes our heart sing. With that inspiration, we bring it into form.

Upon completion of this cycle, we start all over again, with another dip into the Well, accessing another thought, another idea…that awaits our expression of that energy…as if it’s in a queue waiting to “slide” into earth.

Without realizing it, though, most of us consciously experience this process only half-way (outer-globe)…an idea “pops” into our heads, it sets a spark, and then we follow through on it, bringing into form. The “popping” often shows up as:

How many times have we had a “great idea” that we pass on for any number of lame reasons only to later see that “great idea” manifest itself via someone else? For me? Many times!

Think of “ideas” as entities of energy.  They currently reside within the Well. Like us, they seek to come into form on the earthly plane. We humans come into existence through another human already here on earth. For “ideas”, their birthing process happens via thought. Whomever grabs onto that thought and runs with it, becomes the “parent” of that idea.

This week’s mandala asks us to become aware of the entire creative process. Instead of waiting for an idea to “pop” into our heads (outer-globe), we can take a more proactive approach, to directly access the Well (inner-globe), via meditation or any activity that calms the body/brain such as coloring, dancing, stream of consciousness writing, running, gardening, taking a shower, working on the car, etc.

Prior to doing said activity, set a conscious intention to connect with the Well (or any name we want to give it) asking for an “idea” that is in our best interest to bring into form. Or if we already have an idea, then ask to directly connect with the energy of that idea to seek its guidance on how it wants to come into form…thus co-creating it!

ps: Each week I wonder how I’m going to come up with an idea for the MotW. Each week, when I consciously access the Well, I am delighted, yet again, how an idea always “pops” into my head…coming out much better than I would have created had I been left to just my own devices. I am eternally grateful. ❤

I would REALLY LOVE and appreciate seeing your colorings, and reading about your experiences…so please post in the comments below. Thanks 🙂

Published by The Mandala Lady

My Mission: connecting with our Inner Light in delightful, inspiring ways For me, creating mandalas is more than just coloring pretty patterns in a circle. I do it because my spiritual evolution and creativity require it of me. My mandala designs come about within an active meditative state, connected with my higher self, my spiritual guides and nature spirits. Together, we bring into form, mandala art the allows me to re-connect with my own inner peace and joy, letting me explore and expand my own creative spirit to however far and in whatever direction I want to take it. As part of my own spiritual journey, I encourage, and hopefully inspire, others to explore their own creativity, to help them re-connect with their own inner peace and joy. As a means to that end, I make all of my mandalas available for people to color. Why should I have all the fun? View all posts by The Mandala Lady